The cult of the Muxía stones 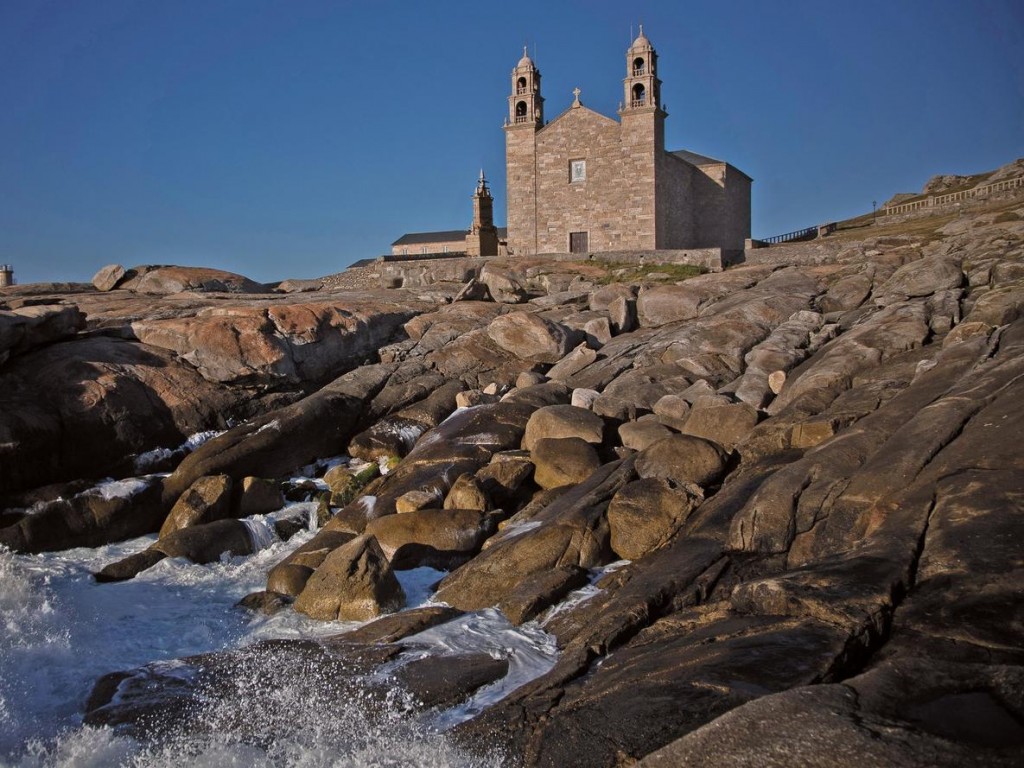 It was in the 12th century when the first shrine was erected, located in the end of the peninsula, where Muxía is based. However, this point was previously a place of pagan worship, known by the existence of preroman remains, and it was christianized with the construction of what we call nowadays the Sanctuary of Nosa Señora da Barca.

Several rituals and legends related to this Pre-Christian cult that surrounds the sanctuary have survived. The main example are the stones, being an object of worship and symbolism for previous religions that worshiped the forces of nature.

So, today we have stones like “Abalar”, a triangular megalith of 9 meters long that has the curiosity that it sways when people stand on it, producing a slightly hoarse sound. Tradition says that this movement occurs when the people who get on it are innocent of sins. There are many legends and properties attributed to it. Among them, it is said that on one occasion, when somebody wanted to steal in the Sanctuary of Nosa Señora da Barca, the stone began to swing so strongly that with its sound it woke up all the neighbors, scaring the thieves. However, a storm in 1978 moved it from its original place and lost a lot of its movement. Later, it was damaged and lost one of its tips.

Others, such as the "Pedra dos Cadrís", with the shape of a kidney, carry with them the performance of rituals. In this case, due to the healing properties attributed to it, the pilgrims must pass nine times under it in order to cure their rheumatic and kidney problems, according to tradition. Another interesting fact is that it has been christianized in relation to the figure of the Virgin Mary and it is already known that, apart from the many of its cults around the "Mother", there are other ones, much older, which even reffered to Mother Earth. With this christianization more legends arose. The main one and for which this sanctuary was built is the one that tells how the Virgin came by boat to this point to encourage the Apostle Saint-James during his preaching in Hispania. That way, the stones that surround this small temple are interpreted as the different parts of her ship: the boat (Pedra de Abalar), the sail (Pedra dos Cadrís), and the rudder (Pedra do Timón).

To better understand the sacrality of this place of worship, we provide you the original legend:

"During the preaching of the Apostle around the Comarca Ártabra, after his stay at the city of Duio (Region of Finisterre), the place became flooded and all its inhabitants disappeared, as a punishment for ignoring the preaching of Santiago and worshiping the sun instead. Later, he retired to the secluded region of Muxía and there, in the Punta de Xaviña, he stopped to pray to the Lord with the intention that the people would stop with their hostility with which his preaching was received.

Suddenly, the apostle observed a mysterious boat that approached the shore, and in it he contemplated the Virgin, full of beauty and majesty. The Virgin encourages then the apostle and communicates to him the success of his preaching on Hispania, ordering him to return to Jerusalem, since his mission was fulfilled. The boat in which the Virgin arrived at the Punta de Xaviña was made of stone, as well as the sail and the rudder, which were deposited there. "