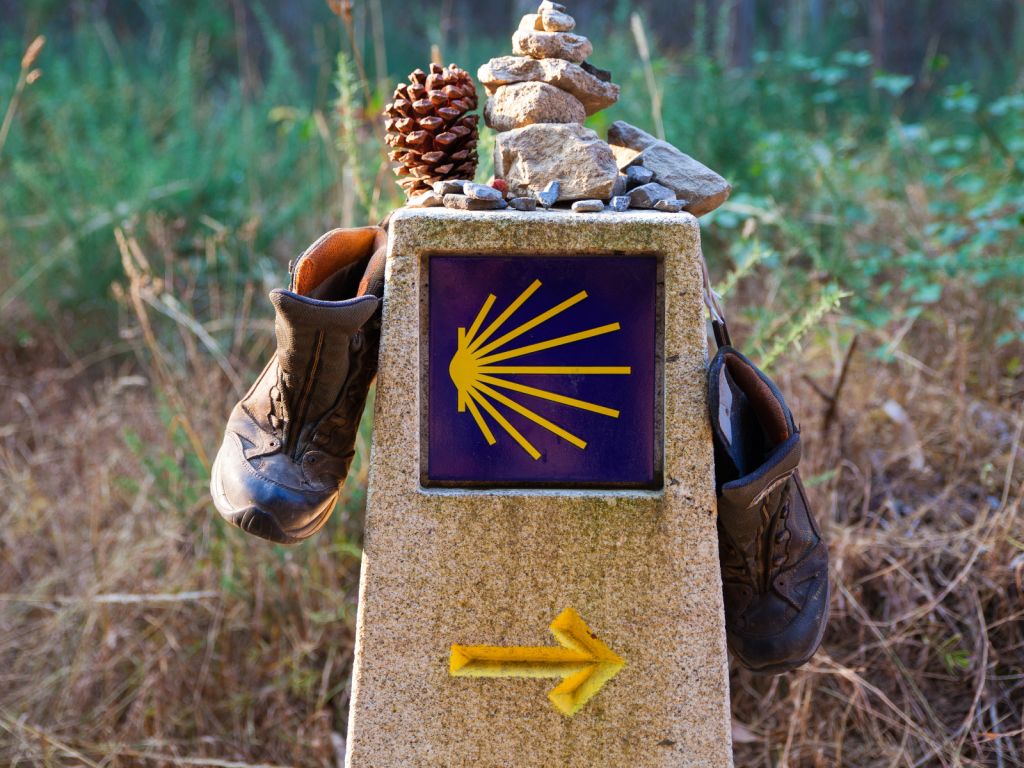 Walk the entire Primitive Way, from Oviedo to Santiago de Compostela, in this customizable 16-night program. We will cross the interior of Asturias and Galicia to discover the first known path of the Camino, the one followed by the king Alfonso II the Chaste in the 9th century to visit the recently discovered tomb of the Apostle Santiago.

From 1600€ per person. Private and flexible. Check prices and availability.

Arrival to Oviedo, historical town and capital city of Asturias. The first devotees from Oviedo followed the ancient route that, according to tradition, led King Alfonso II the Chaste to the Apostle’s tomb, in the first third of the 9th century.This route from Oviedo to Santiago was a safe itinerary that was frequented until well into the 10th century, when the present-day French Way was consolidated from León, the new capital of the kingdom. It is worth arriving in time to discover this magnificent city and all of its heritage. 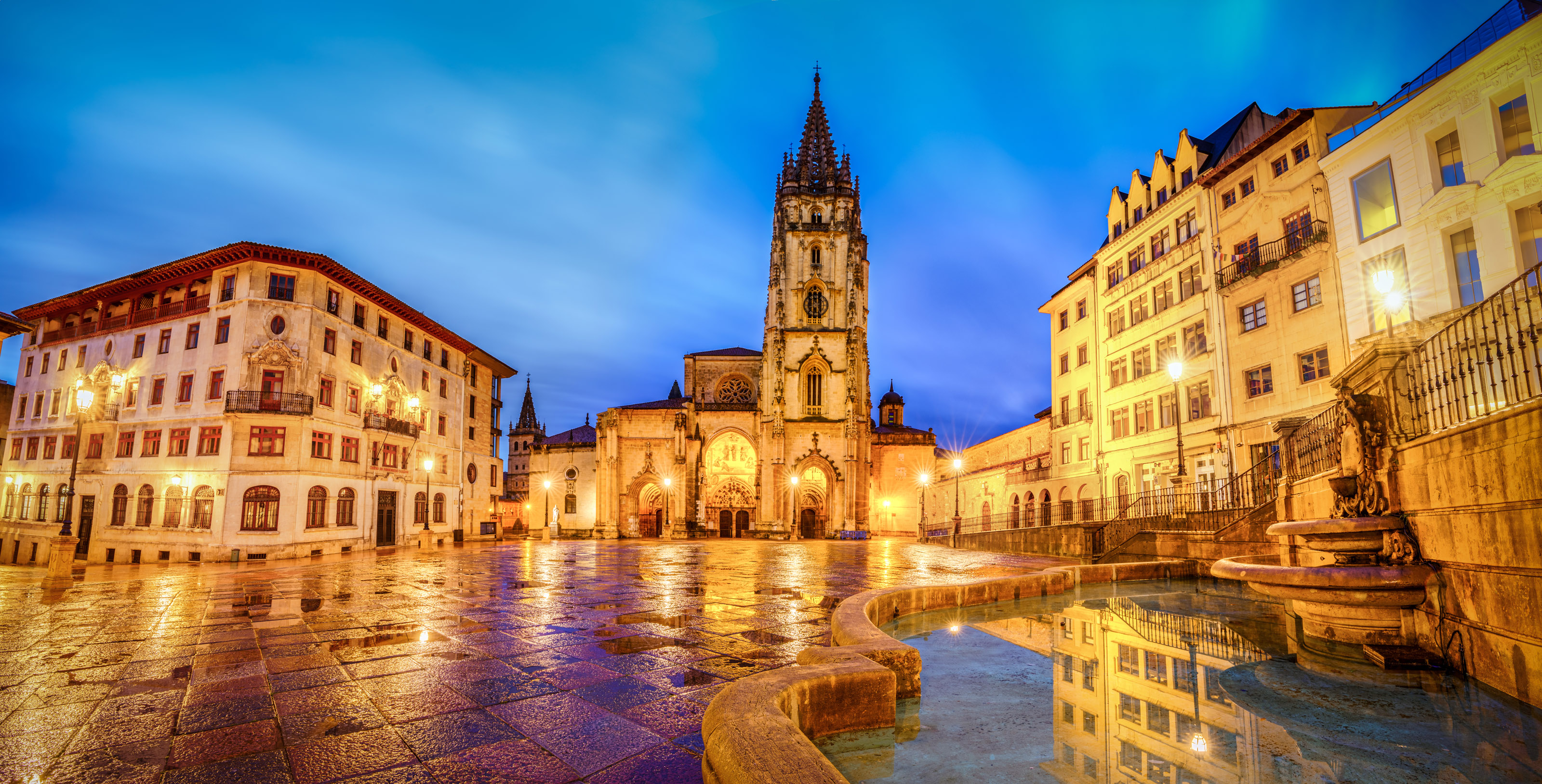 The first stage of the Camino Primitivo connects the city of Oviedo / Uviéu with the town of Grau / Grado, along 25.62 km that run through the councils of Oviedo, Las Regueras and Grado. It is a route without great difficulties, which in its first kilometers runs through the foothills of Mount Naranco, in a more or less flat path, which finds its main incidents later on, with a sharp descent between Llampaxuga and Lloriana and then with the ascent to Taraniellu, and the subsequent descent towards Premoñu, then beginning a practically flat route that leads to the capital of the council of Grado, a nice town with very well preserved indiano architecture. A walk in the Parque de San Antonio will lead you to the Palacio Miranda-Valdecarzana and the ruins of the medieval wall. Close by, you will find the town hall with its lively colours and the General Ponte square, where there is a traditional market particularly for bread. This stage of the Camino Primitivo runs between the capitals of the councils of Grau / Grado and Salas, the two municipalities where we will walk along the 22.51 km that the route comprises. It is a stage that in its first section faces the ascent to the Alto del Fresno, then, from the town of Grado to the vicinity of the Fresno sanctuary, along approximately 4.5 kilometers. The ascent intensifies notably in the section immediately before reaching the top. Then we descent to the place where the Narcea river begins, in Cornellana, and after this we ascend again, much more slightly, until we reach the town of Salas.

This stage, which runs between the capitals of the councils of Salas and Tinéu, has a total length of 19.73 km. The distribution in terms of the typology of the pavement is very balanced, since 6.5 kilometers are made on asphalt roads while 5.88 km circulate on dirt paths and 6.76, on gravel tracks . It circulates in a progressive ascent, more pronounced at the beginning, between the towns of Salas and Porciles, starting from this point to present a very stable profile, with few incidents. The two major urban centers along the route, the villas of Salas and Tinéu, in both cases have interesting testimonies of cultural heritage, with deep Jacobean tradition, manifested in numerous large houses, urban palaces, churches and chapels, which mark the historical complexes of the two towns. 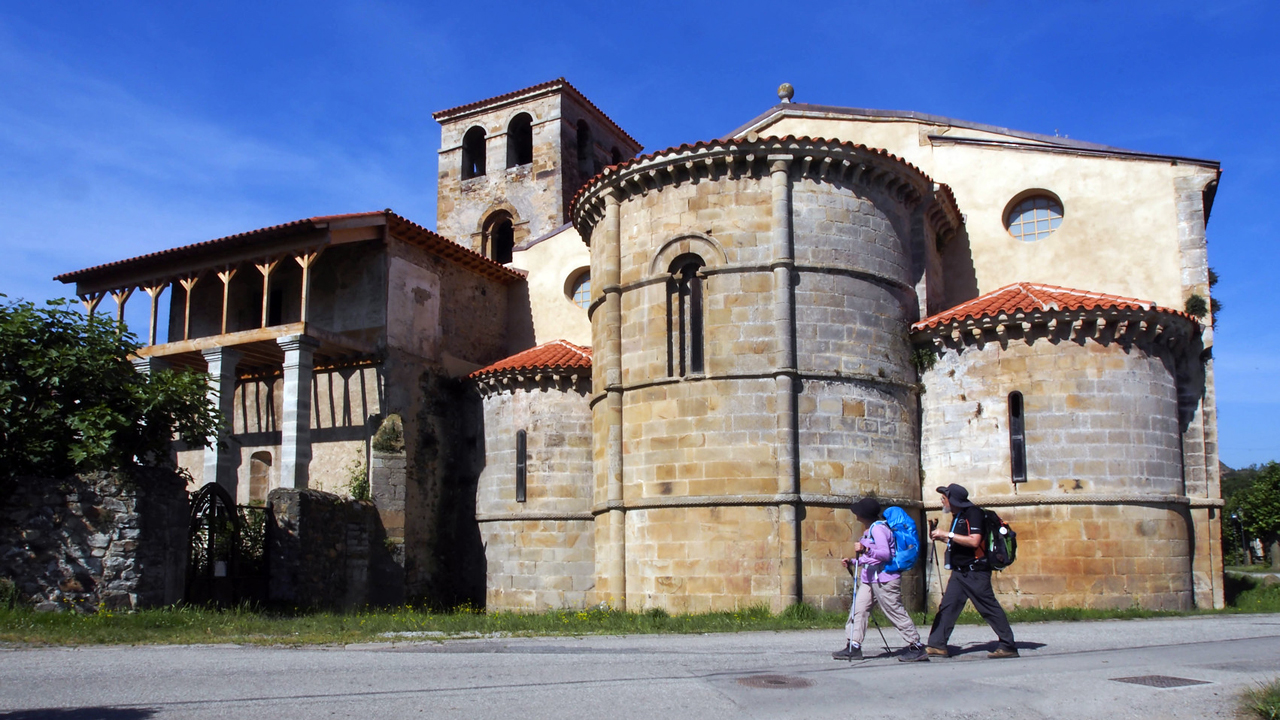 In the first part of the itinerary, you ascend from Tineo to the top of Piedratecha, saving a difference of about 200 meters in 5 kilometers, then begin a steep descent of  3 km. After that our route goes without major incidents until the final ascent, on the border between Tineo and Allande, of the Lavadoira hill. This stage enters fully into the western Asturian area, characterized by its buildings with slate roofs and by small villages that mark the Jacobean itinerary, such as Villaluz, Vega del Rey, Campielllu, Bourres, Porciles or Ferrói, all of them small locations with agricultural and livestock farms, many traditional buildings and heritage elements of interest , such as small chapels and churches. Among the population centers, the Way runs between meadows and wooded areas, and the route is often flanked by dry stone walls.

The climb to El Palo means saving, in the 8 kilometers that mediate between this landmark and Pola de Allande, a difference of about 600 meters of altitude. Despite being quite a tough start, this ascent will lead you through a surprising landscape. Shortly after leaving the Allande capital behind you´ll enter a completely natural setting, in which the lush vegetation, the water courses and a path flanked sometimes by splendid closing walls made of dry stone, which contribute to configure one of the most beautiful routes of the Asturian Jacobean routes. The itinerary starts from the town of Berducedo, arriving shortly at the town of A Mesa, already in the council of Grandas de Salime, after which a tour of dirt paths and tracks begins, making a first steep ascent just after passing this second town. After leaving behind the small chapel of Buspol, w follow a path through the extensive natural environment that borders the Grandas de Salime reservoir, the great scenic landmark of the stage. For many kilometers you run between plantations of pines and other species, with spectacular views of the reservoir and the Grandas waterfall, which you will pass after a long descent of about 8 kilometers.

Last stage of the Camino Primitivo in Asturias. It runs mostly on dirt or gravel paths, being the percentage of asphalt roads low. The small towns of Cereixeira, Castro, Xestoselo and Penafonte are crossed, and among them wide natural spaces, in which it is frequent to go between authentic vegetable galleries, very pleasant to walk through. Soon we enter Galicia, the region where we will walk until reaching Santiago de Compostela. 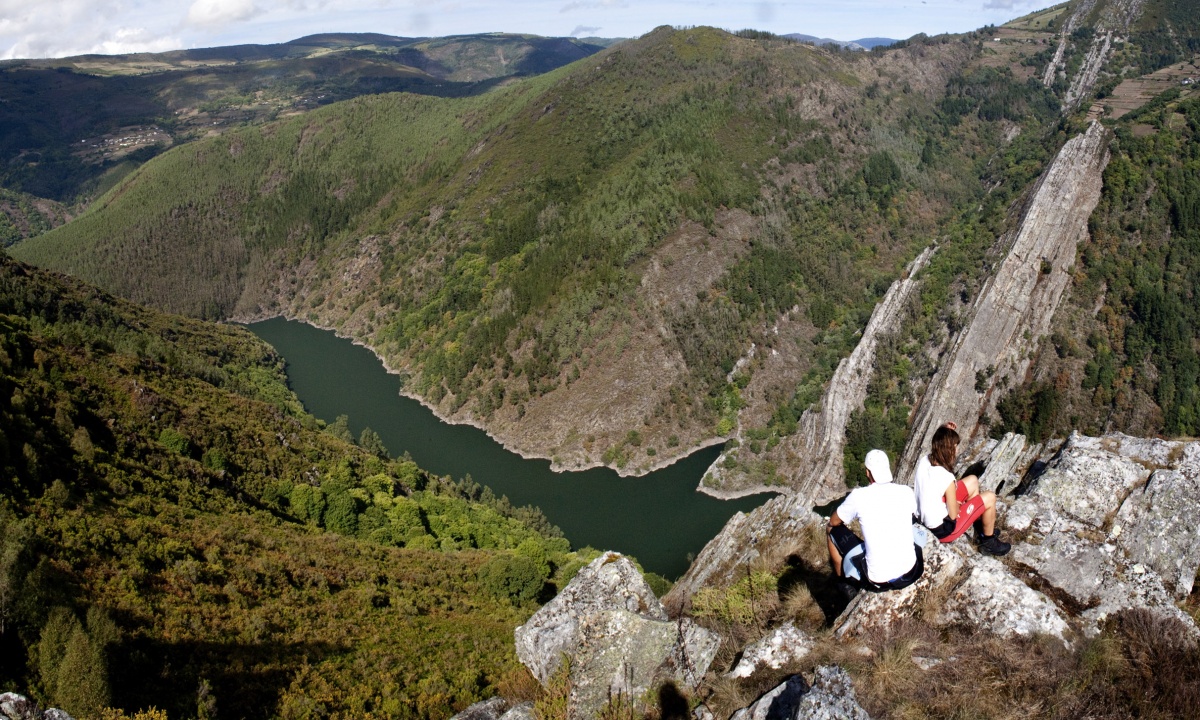 This first fully Galician day basically runs along dirt tracks, following the axis of the LU-530 road, with continuous slopes although, in general, moderate (with the exception of the climb to A Lastra). Today we pass by the ruins of the Hospital de Montouto, founded in the 14th century to provide shelter and assistance to pilgrims.

Long stage, along comfortable dirt and asphalt tracks, with very gentle slopes. Between O Cádavo and Castroverde we will overcome a modest hill but then we will go along the Lugo plateau to the capital. The only intermediate town with services is Castroverde, although in some villages they have taken advantage of the continuous passage of walkers to install vending machines. Today we finish in Lugo, the largest city on the Camino Primitivo: the Roman wall and the Cathedral of Santa María stand out. 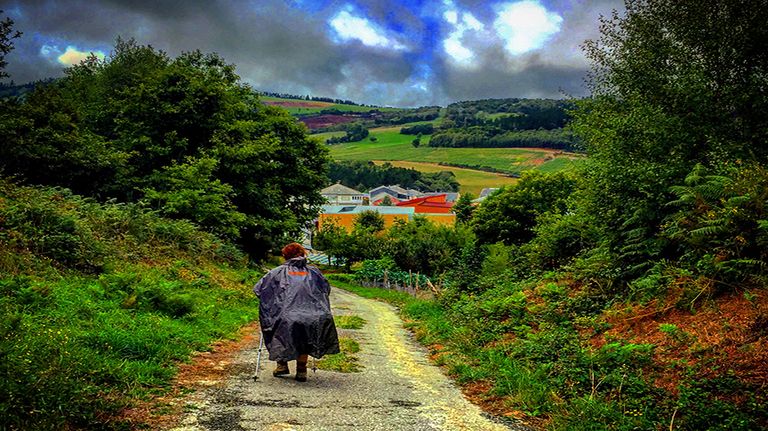 After many days walking it´s worthy spending an extra day in Lugo, and discover its amazing roman and medieval history, as well as the famous gastronomy in some of the very reputated restaurants of the old part of the city.

Although the predominance of asphalt during the journey could be a handicap, the beautiful scenary through where the Camino runs compensates it. Despite gaining height throughout the day, with the exception of three marked slopes, the rest of the profile is practically flat. Rural stage, along small dirt tracks and, above all, asphalt, with frequent moderate slopes. We will cross several small villages, some of  them with restaurant services, until the end of the stage in the municipality of Melide, where we converge with the French Way.

With the new flood of pilgrims on the French Way and other variations, the solitude of the Primitive Way is left behind, and green hills and small hamlets start to predominate. There are numerous water courses, with ups and downs .... After 11 km walking we find Ribadiso da Baixo, one of the best well known and oldest "albergues". 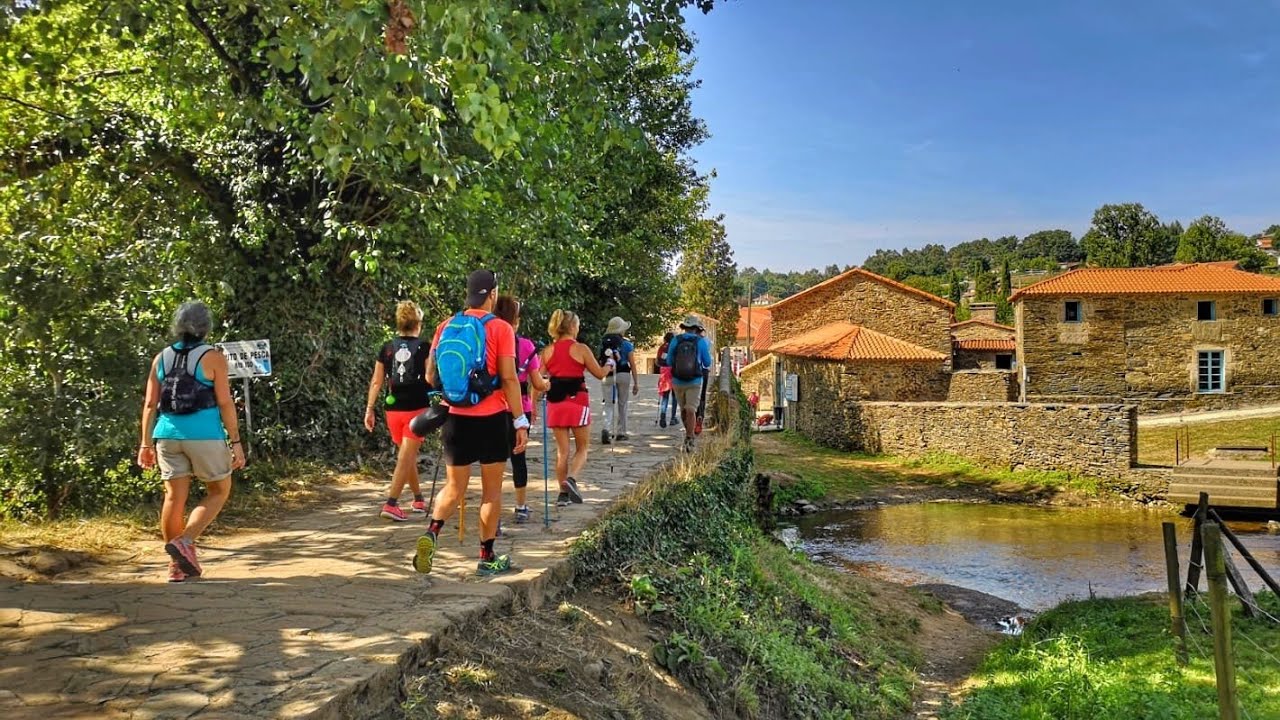 Comfortable stage with few slopes. We advance along long forest tracks, crossing forests and meadows. We follow, as in the previous stage, the axis of the national N-547: caution when crossing it. Overnight at O Pedrouzo puts us at a good distance to arrive tomorrow to Santiago.

The municipality of Santiago awaits, next to the airport, and leads the pilgrims through the parish of Sabugueira. From the Monte do Gozo hilltop you will be able to get the first panoramic view of Santiago de Compostela. Soon we start an urban tour which takes us through the street of San Pedro and ends in front of the baroque façade of the cathedral.

Free day. After the Camino a well deserved rest in Santiago is necessary. We will have the opportunity to participate on the different rituals of the pilgrim, such as visiting the Cathedral, joining the Pilgrim´s Mass,  getting our certificate "Compostela", and of course enjoying this vibrating town. 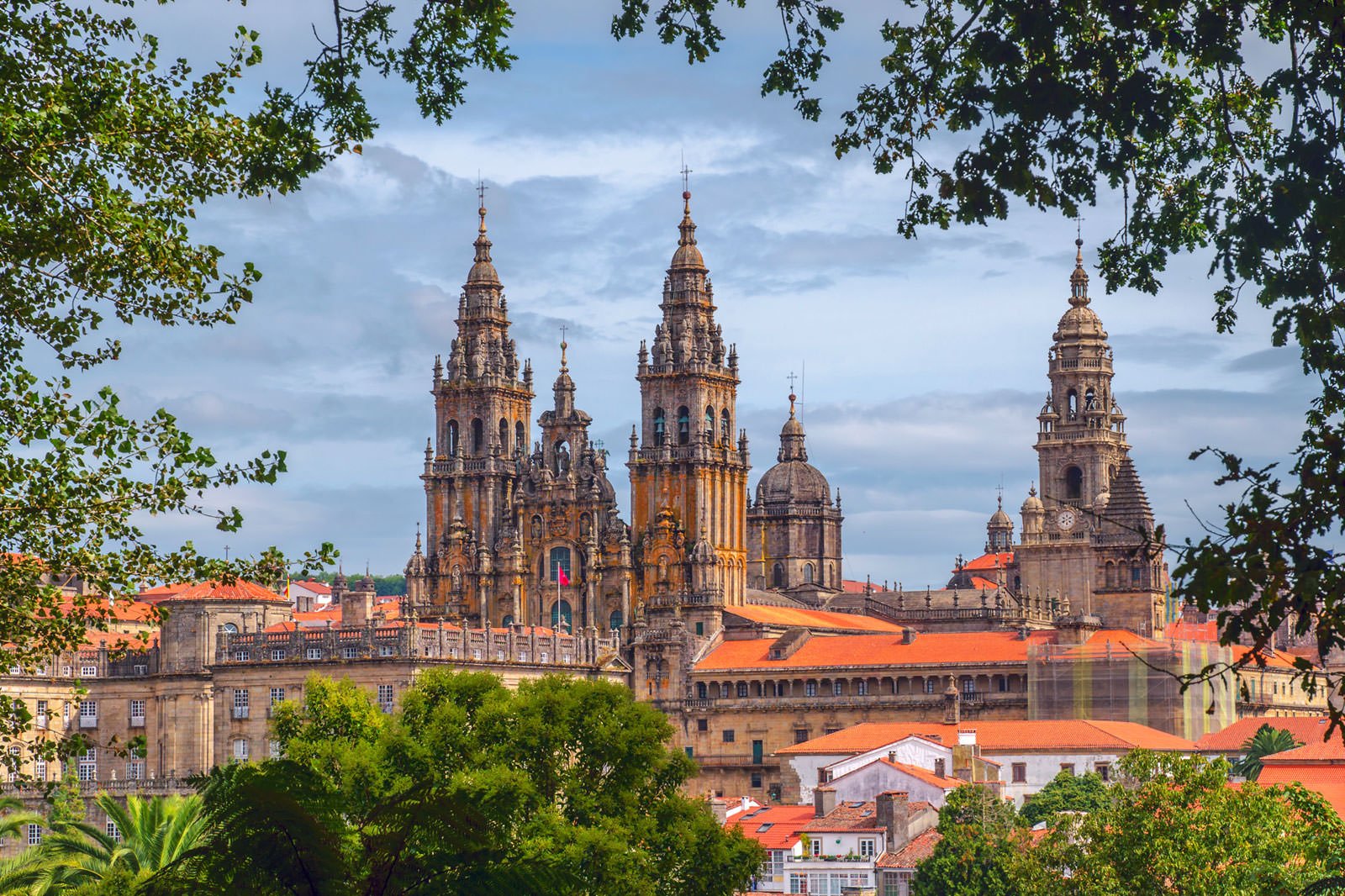 There is no availability for the selected date. Use the form to find other available dates