The Portico of Glory and its original polychromy after 50,000 hours of restoration work 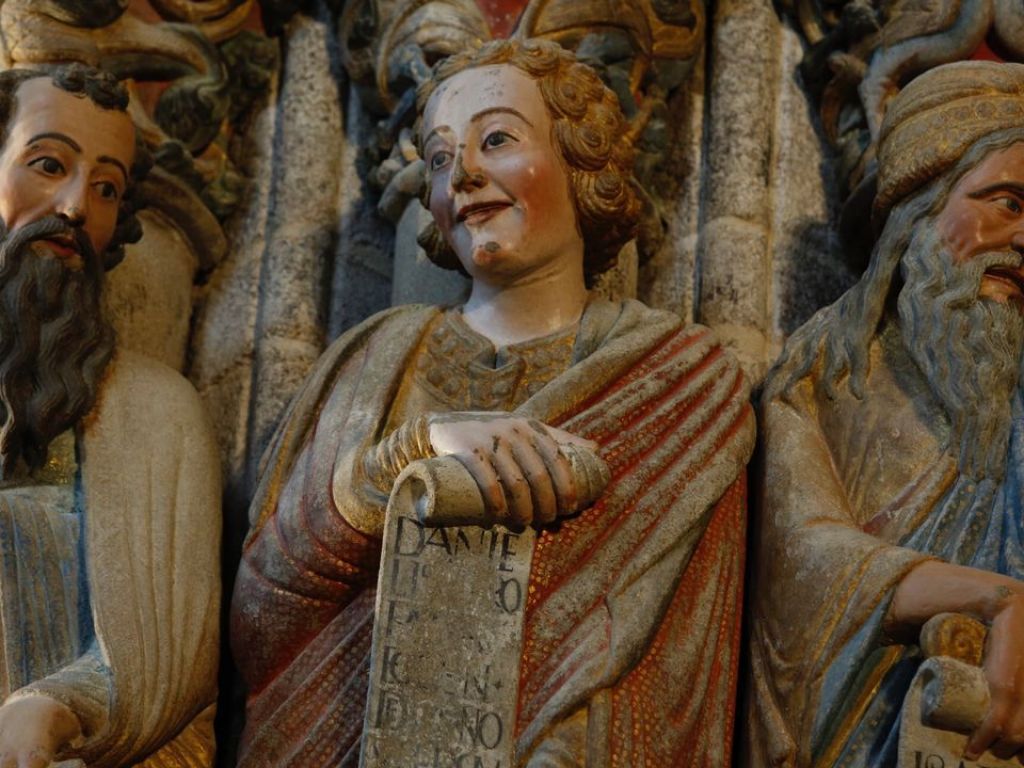 More than 800 years ago, Maestro Mateo and his workshop made the famous Portico, which constituted the western gateway to the cathedral, located behind the Romanesque façade, now disappeared. It is said that it remained open, so that the portico could be seen from the outside.

Master Mateo developed an entire iconographic program, and divided this architectural structure into 3 levels: the crypt, which symbolizes the earthly world; the portico, in which the “Celestial Jerusalem” is represented; and the upper part, which represents the elevation of humans to the divine, the celestial world.

The portico is divided into 3 arches: the central one, taller and wider than the rest, has the most important decoration of the whole. In it, the main theme is the apocalyptic vision of San Juan, counting with representations as the 24 elders of the apocalypse on the archivolt, carrying different medieval musical instruments. In the center of the tympanum we can see the figure of greater size and therefore greater importance: Christ showing the wounds of the crucifixion, and around him the four evangelists accompanied by their respective symbols. 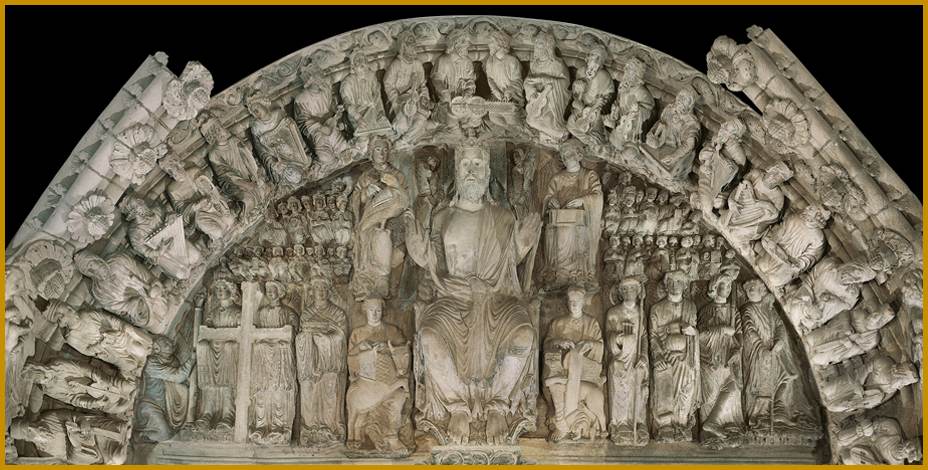 In the jambs on the right of the central arch are represented the prophets Jeremiah, Daniel, Isaiah and Moses, while those on the left represent the apostles San Pedro, San Pablo, Santiago el Mayor and San Juan.

Regarding the mullion (central pillar that divides the door in two), it is occupied by the seated figure of Santiago the apostle, with the pilgrim's stick and carrying a parchment. Under it, there is a column representing the tree of Jesse, name given to the genealogical tree of Jesus Christ from Jesse, father of King David. 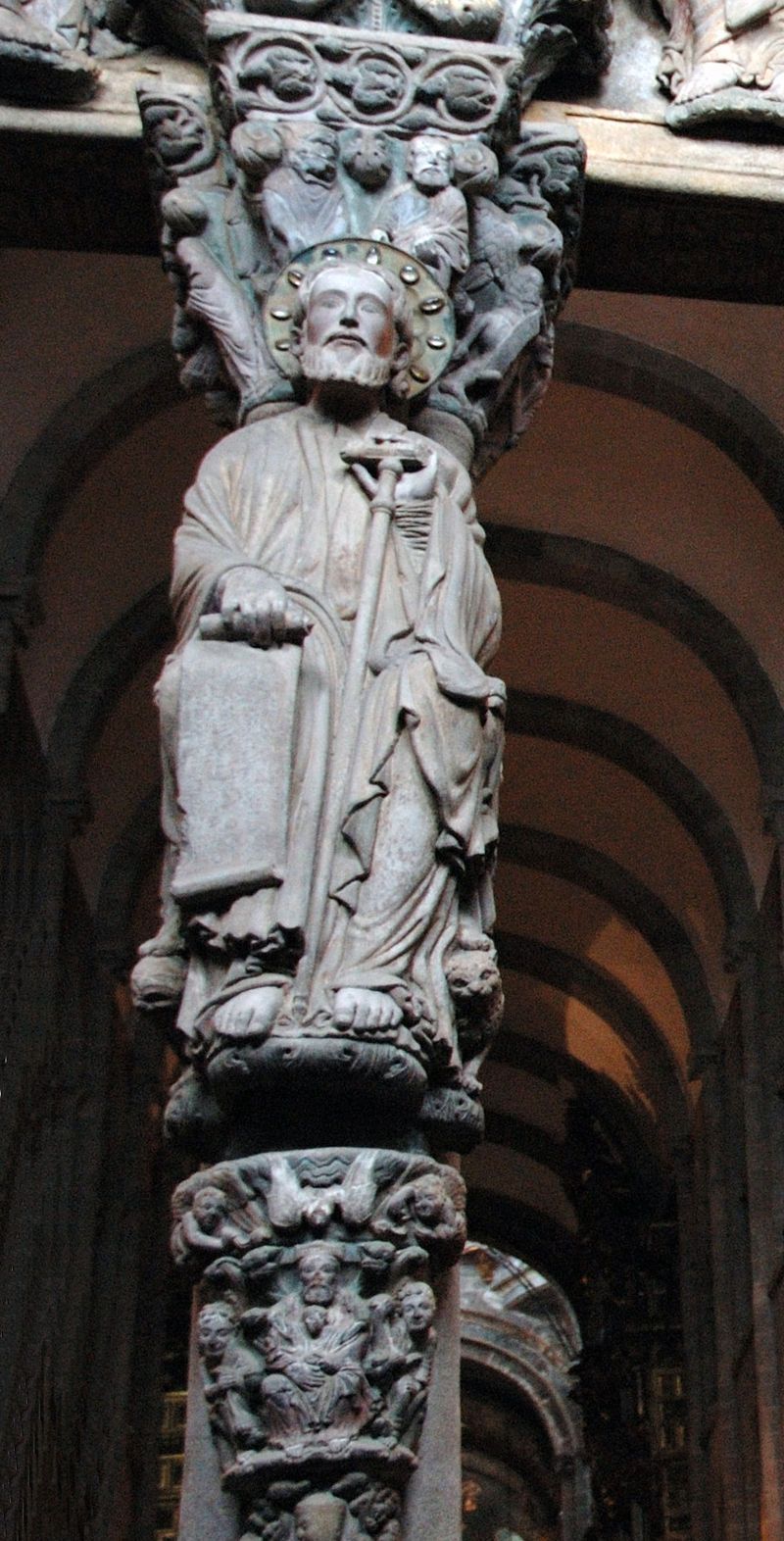 It should also be known that the decoration of this portico, as usual in the Romanesque, goes beyond the decorative function, having another much more important function: the didactic one, aimed at a mostly illiterate population. Thus, Mateo wanted to capture in the left arch the entrance to the limbo, while the central one captured the saving mission of Christ, visible in the wounds and instruments of the Passion, while in the background we can observe the souls of those who are already in the presence of God. Finally, the right arch would represent the Last Judgment, with figures of monsters that torture the souls of the condemned on the right side of the archivolt (hell), and on the right (sky), the saved souls.

Since 2008, a large project has been carried out in which experts from the most prestigious universities of the world participated, and which represents a before and after in the investigation of this type of work. It was necessary an investment of eleven million euros, and this was supported by the Xunta de Galicia, the Ministry of Culture, the Cathedral Foundation and especially the Barrié Foundation.

Today (July 2, 2018), a decade later, the portico is inaugurated, with an act in the presence of Queen Sofia. During the meticulous work of restoration, with more than 50,000 hours invested, a layer of dirt, salts, biological remains and acrylic accumulations that covered the surface of the great jewel of Romanesque - also affected by humidity – that gave it a gray and dull look , has been eliminated. The most advanced techniques have allowed to recover the polychromy of the masterpiece of Master Mateo, despite the deterioration of the centuries and the successive layers of painting of the images. Now we can see the original colors recovered; reds, golds and blues give color to the stone in those areas where the original tonalities could be recovered.

In addition to this, the Cathedral Foundation has imposed a series of preservation measures, which involve the "encapsulation" of the portico, the restriction to guided tours and a strict control of the number of people who access to it ,in order to avoid its deterioration. As expected, the rites carried out in the portico, such as the tradition of the "santo dos croques" or laying the fingers on the mullion, will also be prohibited. 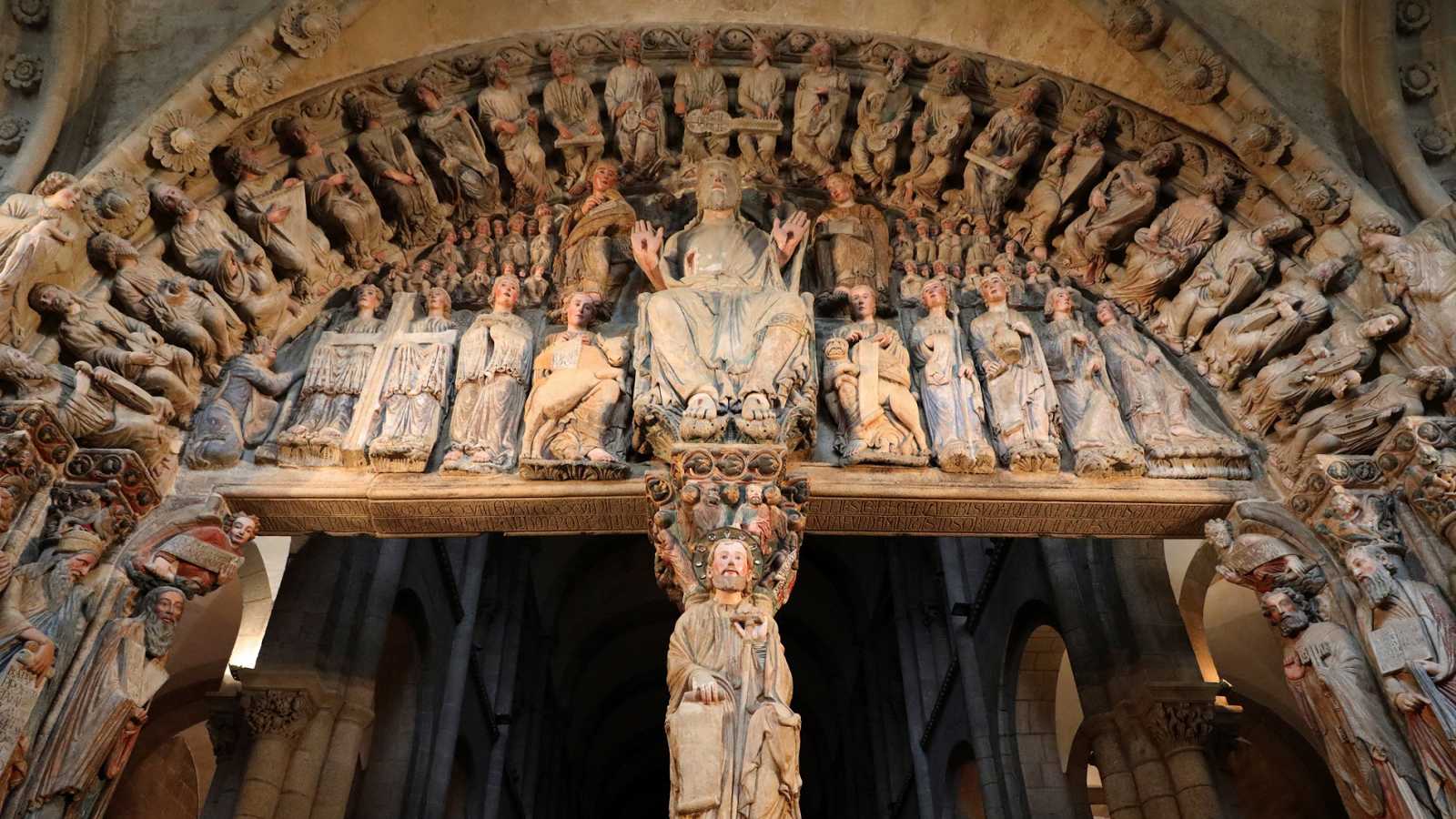