Art Nouveau in the city of Coruña: the residences of the bourgeoisie 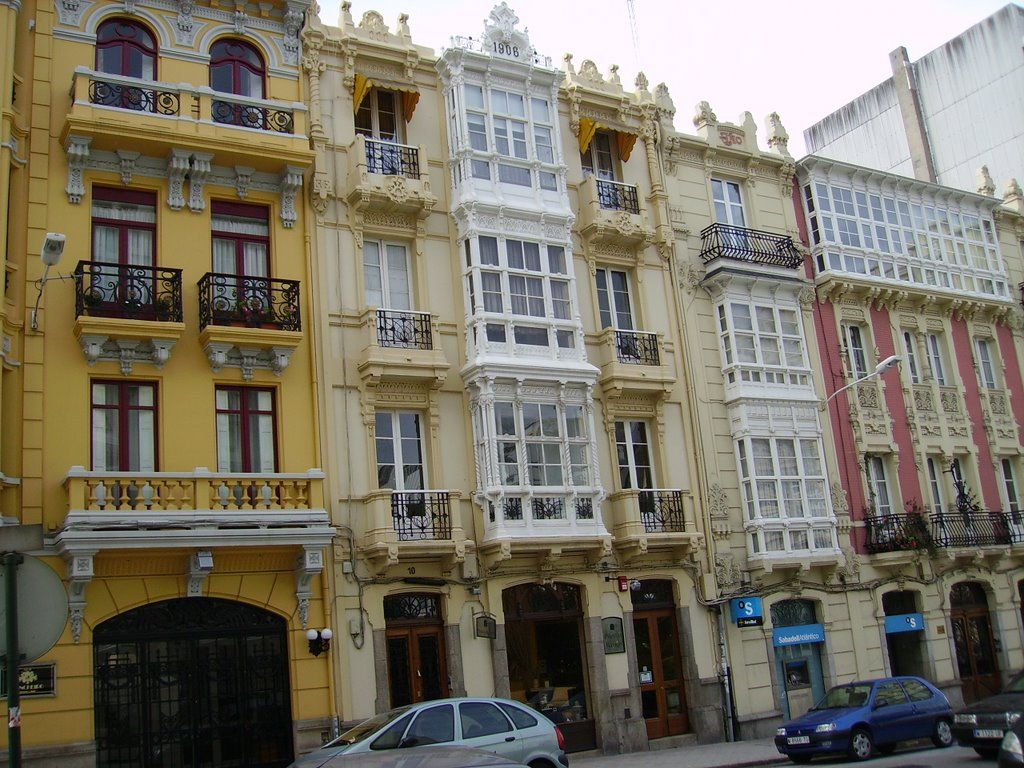 In order to understand the physiognomy of the city of Coruña, we must know that a big part of what we see nowadays was built in the late nineteenth and early twentieth centuries, when new industries and banks were installed, which served as the basis of the modern city’s economy . Coruña began to improve its infrastructures, and many houses and buildings were built, with special relevance to the bourgeoisie and the artistic movements reflected in their architecture such as modernism or eclecticism, which we will see in the so-called Ensanche, area of ​​expansion and housing construction that will arise as a result of the space needs of the population. The walls of the city were demolished in the mid-nineteenth century, responding to a new and more liberal thinking that began to spread throughout the city, denying this symbol of "oppression" with which this fortification was associated and aiming to become a city of economic importance, responding to the cosmopolitan mentality of this new social class.

In this way, today we can see the traces of that new bourgeoisie that emerged at the end of the nineteenth century, in many buildings around the expansion area called the Ensanche, with typical characteristics of modernism mainly.

The Spanish modernist architecture, the most decorative one in Europe, was of great importance, especially in Catalonia, with artists of the stature of Gaudí. Despite this, cities such as Coruña are an example of the fact that this movement did not focus solely on this region.

The modernist houses of this city are characterized by the recurrent use of plant motifs: lilies, leaves of horse chestnuts, aquatic plants, roses, camellias in garlands ... This is better understood knowing that part of the inspiration comes from the East, and mainly the Japanese influence is noticeable in the representations of its vegetation or even exotic fauna. Also women faces (very similar all of them) were frequent in the façades of these buildings. A very interesting curiosity is that it is said that all these busts are representations of a specific woman: Elizabeth Siddal; poet, artist and British model lover of the pre-Raphaelite painter Dante Gabriel Rossetti. 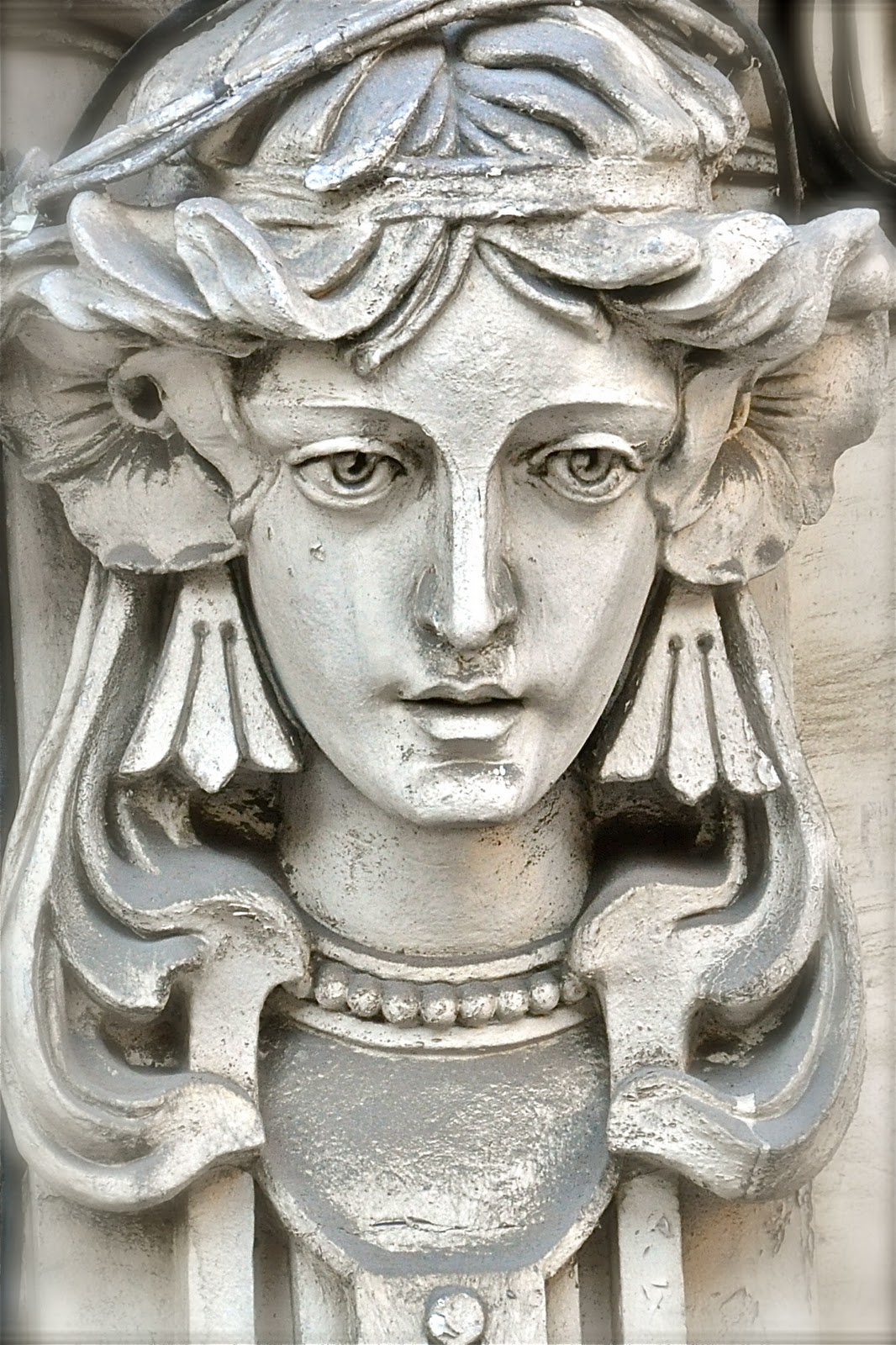 Regarding the materials used, it was very common to use wrought iron, specifically from Wonemburger, the local foundry company of Belgian origin. Thus, almost all the bourgeois houses that we can observe have elements of iron in their facades, and in them it is also very common the appearance of solar symbols in balconies or windows. Native Spanish artisanal techniques are also recovered, such as with Arabic tiles or glazed ceramics as a reminder and admiration for forms of a non-industrial past.

These luxurious residences that mimic those of Vienna, Paris and Berlin pretended to show the economic prosperity and cultural concerns of their owners. Thus this social class differed from the old aristocracy of A Coruña, which still inhabited the Upper City (or Old City) in mansions without galleries and with dark and poorly ventilated rooms, with their backs to the sea and to modernity.

Now, we are going to focus on some of the most interesting modernist houses in the city:

It is one of the most interesting buildings in the city, as its main façade is integrated into the neoclassical complex of the Plaza de María Pita, while the back façade is located in the A Mariña galleries.

The people of A Coruña called it the Golden Tooth, because it shone at dawn between the "white teeth" of the galleries. A remarkable fact is that its balconies, bay windows and arches, are different in the five floors.

Located in front of the church of San Nicolás, it was initially designed by the Baroque master Simón Rodríguez and it supposes the culmination of decorativism inside the houses of A Coruña.

The main façade has the full set of decorative elements typical of modernism in the city and shows one of the main characteristics of this style, the union of various artisan works in glass, iron or wood: columns, caryatids, galleries in several colors, creative ironwork, glass and even curious bricks. It also has the innovative introduction of Moorish arches.

Designed by Manuel Reboredo, this bourgeois residence transmits exoticism, with its swans and reeds typical of the fans and folding screens of the Philippines, Java and other islands of Indonesia, which sailors and travelers brought as a gift to Europe.

Its richly carved wooden galleries and the details of the tiles of the façade give to this building a unique appearance. Unfortunately, the fragility of its construction materials caused it to deteriorate easily. For this reason in 2011, it was restored, returning it to its original look. 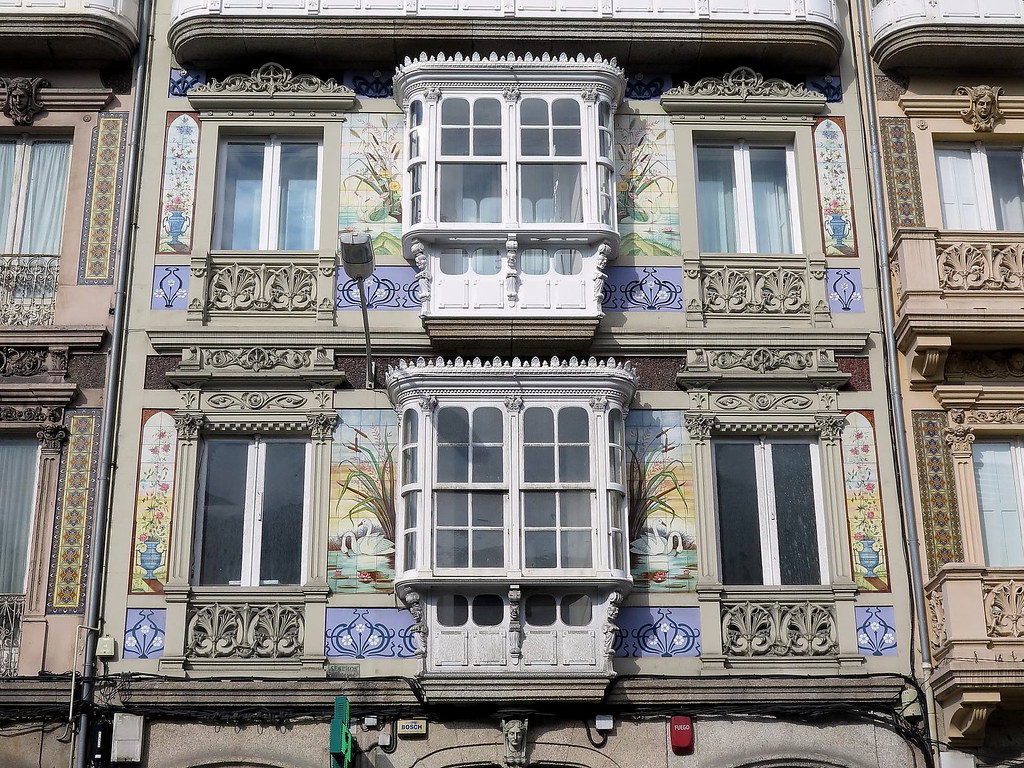 This building stands out not only for its façade, but especially for its lobby, unique in the city. In it, its walls, ceilings and access arch to the lift are full of aquatic plants, with lotuses and water lilies, making it look like an original greenhouse. The stairway aims to be a reinterpretation of the access to the Laurentian library in Florence, work of Michelangelo, by arranging its steps as descending lava. The lions of the gate, the eagle and the caryatids of the cornice symbolically defend the inhabitants of the house, like in the ancient Persian palaces.

The house is designed by Julio Galán, well known Spanish architect, very present in the city of Coruña, and famous for the reconstruction after the Civil War of most of the savings banks of Spain. 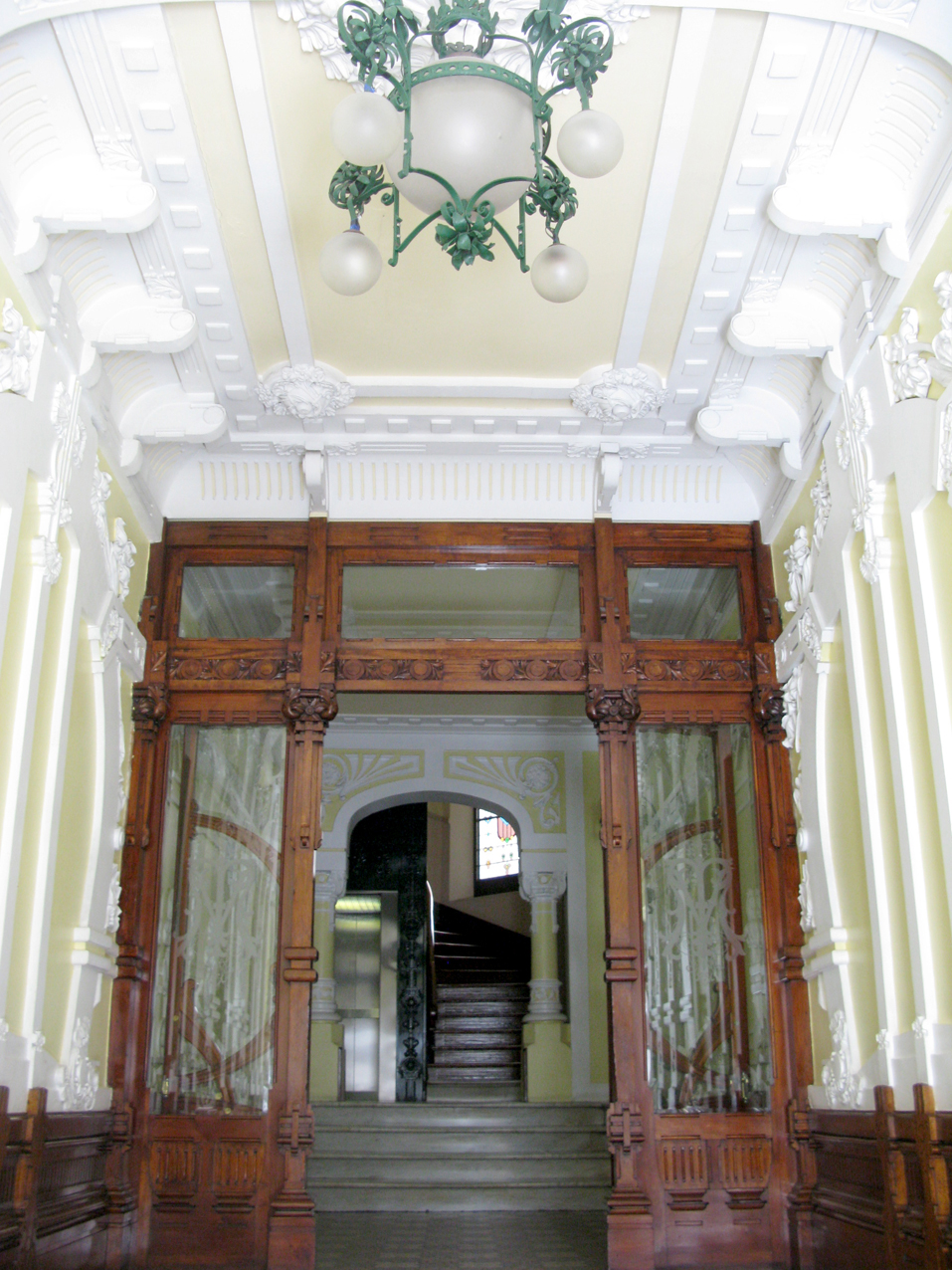 By the same architect as the previous house, in the attic of this house we find a unique decorative motif in the world of architecture: dozens of eyes that observe the viewer. It transports us to a surreal world typical of cinema and literature. The autochthonous flora of the peninsular northwest appears reflected, in both sides of the central viewpoints and in the marquetry and balconies of iron, with forms of leaves of oak and chestnut tree. If you are interested in discovering A Coruña, accompanied by our official guides, there is the possibility of a guided tour of the city. For more information and reservations: